This has not been edited and may well end up being tweaked.

Rowan reached sight of the Rockies just as the sun was setting. The low light on his face seared his tired eyes after thirty-six hours driving but the satellite navigator on the truck had helped, particularly at crossing frozen farm fields to avoid a border stop. Neither of them had papers and he wasn’t up to giving explanations. He could just imagine the reaction to his statement, ‘Well, I am a five-hundred year old werewolf and this is a young wolf in the making. No, we don’t have passports because we aren’t really human anymore.’ He’d deal with getting new identity documents once he had Morgan safe.

Luckily, the truck was a four-by-four or he would have been in trouble with the snow. Morgan hadn’t stirred, despite the two stops for gas and one to change to Canadian currency at a bank just as they opened in the morning. He hadn’t thought she would waken after the strength of stuff he had given her. Five more hours to drive through Calgary and Banff and then he was into the interior of British Columbia. Any side road would do after that point. A whine from the rear of the truck raised the hair on the back of his neck. His time was running out. He pulled over on the hard shoulder to check on Morgan. She twitched and moaned. The change was coming sooner than he wanted. Not good. He might not have time to strip her before he released her if he didn’t do so now, a necessity, if not his preferred choice. He tried to be gentle to keep her hibernating. Stars, she had a great body now she had put on a bit of weight and wasn’t such a skeleton. Down boy, he couldn’t think about that. He wrapped her in purloined duvets to cover everything except her head.

The world spun when he tried to climb into the cab again. He took a moment to clear his head. Five hundred years of endurance kicked in. He could do this and he could do it safely for both of them. He rolled down the window, sucking in a blast of arctic air to keep him awake for the next stretch. Calgary flashed by in a glare of garish Christmas lights, followed by Banff with more subdued decorations. The noises from Morgan became louder but this didn’t disturb him as much as an overriding sense of dread. Something stalked them, and yet he couldn’t see any vehicle behind him, not on a consistent basis. The sense of oppression continued until three hours before dawn. Now he knew who hunted him. A vampire and a long distance one at that. Someone needed to check into a motel with vacancies, which wasn’t easy, given the ski season in full operation. Someone needed to make quite sure he had a nice dark room before daybreak. Good, it gave him time to set Morgan free. He turned off on the first side road, driving until he found a cut out. The growls from the back of the truck were getting serious. He pulled over, opening the rear door. One yank got the covers off her. He retreated to the other side of the truck to let nature run its course. The cold would make her change to get her fur, but he had to stay out of her scent pattern or she would attack him. A vibrant howl reverberated. It had begun. He climbed up to the cab roof, out of the way. A slim and beautiful wolf erupted from the rear of the cab. She sprinted into the trees in easy bounds. Rowan slid off the roof to get inside, shutting all the doors. Now, at last, he could sleep. The vampire was going to have to check every vehicle on this route to find the right one and at Christmas time, with people traveling, it was going to take time. Morgan would run and she would hunt until her human memories kicked in, and then she would return to deal with him for what he had done to her. He didn’t imagine she’d be thrilled. Rowan clicked the door locks shut before he surrendered to exhaustion.

Morgan came awake suddenly with an overpowering urge to run. She leapt out of a smelly area into clean forest. With the stars above her head and the sounds of nature all around, her world had no end. Crisp snow bore her weight for the fleeting seconds her feet made contact, leaving only a slight indent. Other fresh tracks snagged her senses with the aroma of prey. Mm, bunny, yum. She found it scrabbling in the snow to get at withered grass under the mantel of white. Carefully she edged around the clearing until she was downwind, her tail now wagging in anticipation. One step at a time, she crept closer, belly low. One mad dash, with the white hare squealing, bounding off at jagged angles and she had it. A bite to snap the neck brought the taste of fresh warm blood to her mouth. She started with the entrails, working her way to the muscles and then crunching the marrow out of the big bones, licking out the goodness. A full belly came with disturbing thoughts. This was not right. Memories of her other life bubbled to the surface in that lonely glade. He had done this to her, the man who was wolf. Yes, she wanted freedom, but not in this form. Her damaged leg began to ache in the cold. She must find him; make him answer for his sins. Her own scent gave a trail back to his truck and an impossible sight.

***
Rowan’s wolf sense roused him from slumber. A predator stalked and he thought he knew who it was. Being inside a locked truck was no security if he guessed right. More pressing, Morgan might walk into a trap if he didn’t spring it first. This showdown was long overdue. He stepped out into the frigid night, snow crunching underfoot, every sense keyed to the slightest movement or sound. Darkness ruled in the time before dawn.

A rustle in a nearby tree spun him around. Stanislav Borinsky, now called Jack Stevens, crouched on a limb, his eyes glinting in the moonlight. The vampire watched, waiting, intent on the cabin of the truck.

“Where is she, old wolf? What have you done with her? You know you will tell me when I’ve finished with you. Why not spare us both the inconvenience?”

Rowan assessed the killing field with a swift glance. Every boulder, depression, fallen branch mapped in his head, every slight depression or hummock in the snow; he smiled at the old bat. “Borinsky, you missed the boat by so much the ticket office closed down hours since. She will never be your prey.”

The vampire leaped off his perch to float gracefully to the ground. “I will have her. I won’t have my operations disrupted by a human. You must see this from my point of view. I need Mullen to front my North American operation and she has fingered him. What is a puny human to us? Come, give me the girl and I will forgive what your pack did to my men. ”

“The girl is mine. Shall we fight?” Bring it on. It was past time they stopped dancing around each other and settled this for good. This wasn’t about Morgan any longer. It was about who was going to survive.
Borinsky hesitated, looking into the shadows of the forest. “How careless you have become in your dotage. Your pack appears conspicuous by their absence. One last chance. Where did you leave her and where is she going?”

A whiff of frigid air brought the scent of wolf. Rowan did have a pack mate, but was she on his side? The old bat missed the spore of a werewolf. Too bad for him. “How about you consider giving up flying? Sink your fangs into me and that is what will happen.”

Borinsky snapped his cloak back from his shoulders. “What makes you think I would want to ruin my dental hygiene on your sorry carcass? We both know I am stronger than you in your current form. I’ll settle for snapping your back to let you freeze to death.” He rose from the ground, floating into battle position.

A sleek gray wolf sprang out of the bush, bounded to the truck bed, and then onto the roof of the cab. She crouched, ready to spring, her glowing eyes intent on the vampire’s throat. The vampire sailed up onto his former perch, shaking out his cloak like ruffled feathers. “That is not a wolf.”

Rowan smiled again. “Not all of my pack are lupine. Shall we discover what happens when a vampire gets bitten by one of my kind? Normally, I am kind to new pups, but in your case I could make an exception. Oh, and by the way, if you want a fight, you had better get on with it. I spy a silver streak in the sky. Still, this shouldn’t be a problem for you in your new life.”

Borinsky made the mistake of looking east. Morgan leapt at him, missing by a spider’s leg, when the vampire flew up in panic. His hiss of outrage made the night colder. “I’ll not forget, or forgive. I’ll find the girl without you.”

Rowan moved close to the wolf, reaching down with one hand to stroke her luxuriant fur. “Oh look, is that some red I see in the sky?”
The vampire took flight in a blur.

Morgan bit his hand, just a little. Reckoning time. “How about if I go get your clothes and turn my back while you change? We can argue all you like after that.” 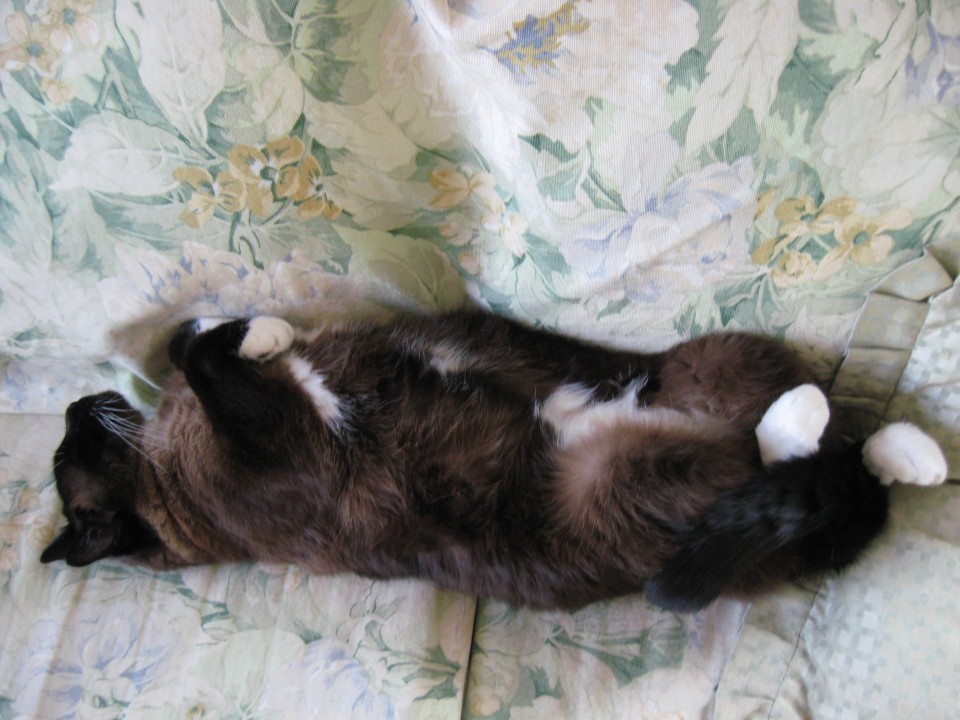