(Note, this is a raw first draft and will be subjected to editing and other changes. I am already doing a sweep through from the beginning.)

Driven by a savage north wind, snow fell in thick, wet flakes against the window. The trees outside the cabin gained new foliage of pure white under their burden of the storm. Rowan’s paw prints were already lightly covered from where he had gone out in his wolf form.

Play by his rules, he said. What rules did a werewolf use? She didn’t want any more killings, but Morgan had read enough in her data hacking to know she couldn’t be caught alive. If she was, her death would not be swift. The orders given had been very clear. Apparently one of the dead men was a family member of an important person in the criminal organization. She couldn’t afford to wait for them, she needed to be prepared. Somewhere in this cabin might be the means to end her life, although she doubted if the owners would have left guns, or even hunting rifles.

She started in the kitchen, hobbling with her crutch from cupboards to drawers, working her way through to find anything that could help in survival or to gain an easy death. Hours later, Morgan had a good idea of the people who owned this cabin. They were into hunting and fishing from the tackle and gutting knives she found. This older couple was also rich enough to spend their winters in Florida, according to pictures and letters she found. There was even a four-wheel drive truck left in the barn adjoining the cabin. The owners had left the keys to the vehicle hidden on the driver’s side of the raised sun visor, but when she tried to fire the ignition the battery was so dead even the fuel gauge didn’t flicker.

“Thinking of going somewhere?” Rowan, in his human form and dressed, leaned against the frame, a scowl marring his classic features.

“So I could see. That was quite the stash you collected.”

“I needed a plan.” She eased out of the driver’s seat to retrieve her crutch. Somehow, she felt safer standing.

“Good, you’re thinking ahead. I planned on using the truck so I sent the pack to find a new territory. They like this area and they will be safe from pursuit here.” He strolled over to her.

“The battery is dead.”

“Look around you. There is a generator and if you had gotten as far as looking in the tool chest, there are jump leads. Now go raid the lady’s closet for something smarter than jogging pants and t-shirt.”

“Precisely. The hunters won’t look for an elderly frump. We need to get moving.”

“But these people are gone all winter. We could stay here until the weather brightens.”

Rowan grinned. “Good, but no cigar. There were adult kids in the photos. Someone might want to come checking on the property, and then there are the neighbors, who would be concerned if they spot smoke from our fire for longer than the few days the kids might create if they came to spend a weekend when the old folk are known to be only summer residents. Besides, the longer we wait, the greater the chance of the ports being watched.”

“That is crazy thinking. Why would they think I would go overseas?”

“I would. You were going to skip into Canada and now have no papers. They can’t know you lost them for sure, but they will take this into account when they don’t see you surface under one of the identities they know about and be very sure they know every detail of the ones you hadn’t gotten around to using. Your next move has to be sneaking aboard a ship headed to a third world country, where cash speaks louder than papers. They will have found money missing when they searched to dead hunters.”

A hard line of goose-bumps raised on Morgan’s arms. Her vision of her future exploded into shards of useless fragments. Someone made sure she was wanted for murder? Even if she found an abandoned shack, sooner or later, she would be forced into a town for some need and then they would catch her. In prison, she had no doubt she would be cornered for some sort of painful death. Money talked and these guys seemed to drip with it. Rowan had the rights of it. If she wanted to live out her life in peace, it couldn’t be in a civilized country.

“I guess I get to raid the old woman’s closet. When do we leave?” She shivered as a breeze sent a gust of arctic air into the barn.

“As soon as you are ready. Now get going.” He flipped open the toolbox, extracting the jump leads to bring them back to the Silverado.

Going through the old woman’s closet unearthed a personal sadness. Morgan found a full wig of dark shoulder-length hair on a shelf along with a picture of the woman wearing a head scarf over a bald head. The words ‘survivor’ were written in black felt tip at the bottom of the picture with a flourish. She hoped she would be forgiven for taking something she needed to cover her own blonde hair. An outdated beige pant suit and a pair of reading glasses completed her transformation. A drawer yielded cosmetics and now Morgan thought about what her mother would use and how. A touch of mascara, but no eyeliner, blue eye-shadow, thick foundation and bright red lipstick completed the look of a much older person. She selected a pair of sneakers as a final touch, given her leg injury, cringing at the image in a full length mirror.

Rowan’s face, when she made her appearance in the barn, was a picture. His shock disintegrated into a laughing fit.

“Fine, I look a mess. Now it’s your turn to get ugly.”
He grinned, flashing his teeth. “Sorry to be a party pooper, but I’m not human. My glamour will shield me, even if they knew what I look like. I guess I could pass for your son.”

If she had been within anything to throw at him, Morgan would have done so with relish. As it was, she fumed while he came over to inspect the horror closer.

“Remember we are playing by my rules now, and you are a beautiful girl under that mask of age.” A glint lit his eyes. “I think you need to be reminded of this right now.” He grabbed her, tilting her back in his arms to kiss her.

Morgan gasped, a mistake, as his tongue darted into her mouth for a very thorough kiss. Close up, his scent brought flavors of musk and pine in a dreamy sort of way to send tingles down her spine in spite of her outrage. The moment he released her, she drew a breath to protest, but he beat her to the starting post.

“Tasty and you are hot, although I am not attempting to get into your pants without an invite.” He grinned. “One would be nice, though.”

Shocked, she gaped at him. “Lose that thought, right now, mister.” The tingles slithered down to her groin. She made an attempt to visualize him as a wolf, but his human form still excited her. This was not going to happen. Rowan wasn’t human. 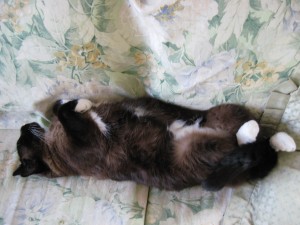 Did I mention I love my cats?